It’s More Than the Workout… 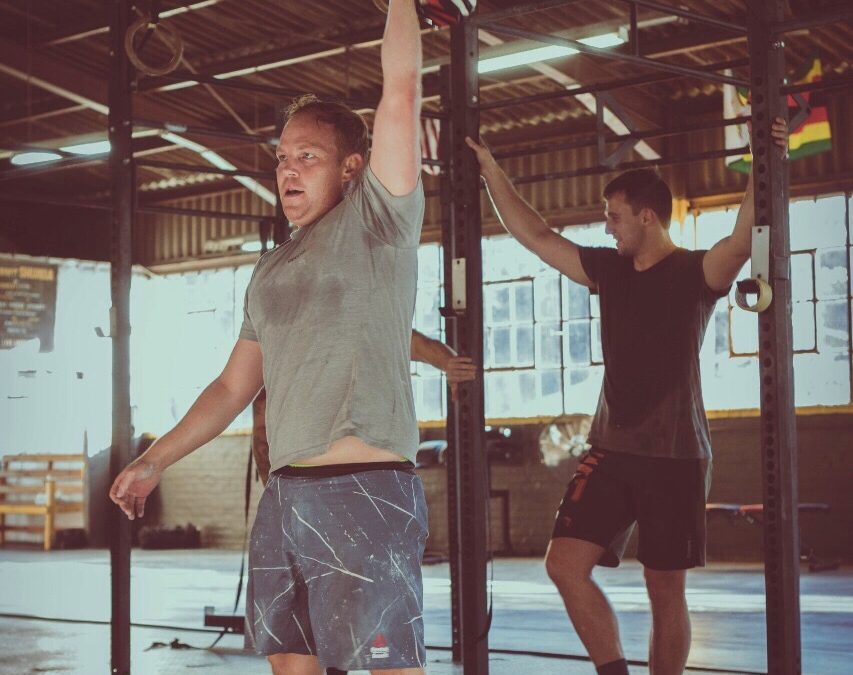 When I finally gave in, putting aside the misapprehensions and prejudices against Crossfit, and did that first class wearing old rugby teesavs and knock-off Nikes, I quickly learned it was not just a workout.

It was a Thursday, my first class, and so it was gymnastics – muscle ups as I recall. Of course, I could barely do a strict pull-up, never mind getting the kipping right despite the coaches’ best effort to swing me like a stiff monkey back and forth.

I marveled at those who could do muscle ups, and even more at those that were so close. Everyone around willing them to reach their milestone, to join that wondrous club that I am still not a member of… It was more than a workout, it was about working towards something new.

Then came the workout… Wall balls. And, as I lay dying on the rubber matting, heaving for breath I also realised that it was more than a workout, it was a brand new challenge for my body, something I had not experienced in any other sport, gym, training regime or fad exercise before.

I kept going, and I had a challenge set in front of me to lose weight. That part was easy; attend class four or five times a week and make sure you got the eating thing right. It was more than a workout, it was a routine that was having a notable effect and I didn’t have to do anything more than rock up and survive.

The challenge came and went, and I stayed on. I was hooked. Pull-ups become easier, and the harder iterations were in my grasp; kipping pull ups, chest to bar, they were all getting ticked off. it’s more than just a workout, its skills training, teaching your body new things and getting that thrill of conquering them.

I started joining in the chorus of supporters during the workouts, being involved in the banter, looking forward to seeing some familiar faces day after day, trying to beat them, or just enjoying building friendships. It’s more than a workout, it’s combined suffering, something to chat about at the end of class, compare notes and roundly curse the coach and his mischievous programming.

I had to get others involved. I was reaping the rewards. Suddenly I was a steam engine at touch rugby and any other social sports I was doing, I wouldn’t slow down and was shocked to see how easily others fatigued because of a life of mostly being sedentary. It’s more than a workout, its subtle self-improvement that you only see outside of the box once you return to where you were.

I spoke to my wife. I told her she should come and forget about magically getting bulky by mistakenly looking at a barbell and rather see that there is more to it for herself. It is more than a workout, it is something my wife and I can do together. It’s the thing that makes us both get out of bed at 4:30 am, knowing there is common suffering.

Together at the gym, my wife and I now have a shared hobby, an activity that we both do exactly the same of. If you really look at it, there are not many instances where a husband and wife can share a common pastime that is both independent and interdependent of each other. It is more than a work out; I am doing my workout, and she is doing hers, and when it is all over, we have moved our own needles forward in terms of fitness, skills, post-exercise endorphins, but we also can curse that damned coach again as we drive home.

Now our friends are CrossFit friends, we have a shared activity, and we have a shared group of friends. One of the big pillars of Crossfit is community, and it is important, but it is subtle. People are afraid of the ‘cult’ of Crossfit, but it is there if you want it, and it is also there when you need it. It is more than a workout, it is accountability, community, and others wanting to see you suffer with them for only the purest reasons!

Go to Globogym, do your bicep curls, 3 x 10, twice a week, get that pump and wear that vest on the beachfront. You will get what you want out of it, you will get a workout, but for me, I like to get those added extras.

A workout is important, and it is necessary, and mostly it is a chore. That is why it is great to go to Crossfit and get more than just a work out every time.